This is how COVID-19 is affecting the advertising industry

by jan vince
in Business
0 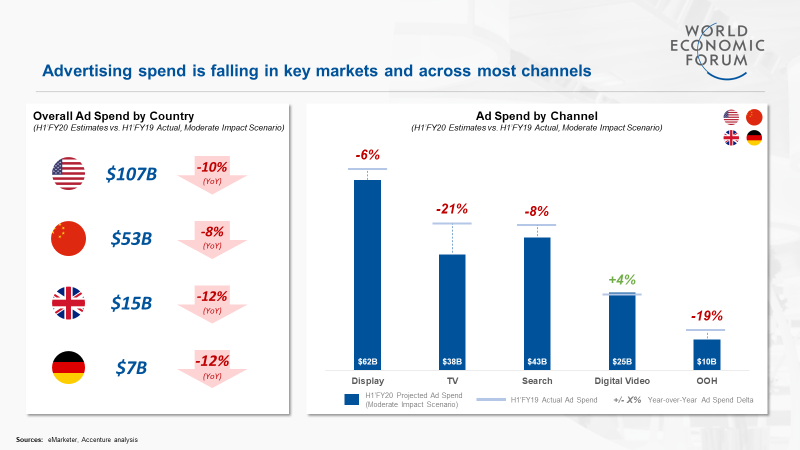 The remainder of 2020 looks set to be challenging. According to the Interactive Advertising Bureau, almost a quarter (24%) of media buyers, planners and brands have paused spending until the end of Q2, while 46% indicated they would adjust their ad spend across the same time period. Three quarters expect the pandemic to have a bigger impact than the 2008 financial crisis.

However, there is a deviation to the principle that companies cut advertising budgets during a recession. In many countries, governments have emerged as advertising buyers to promote public health messages or support journalism. According to Brian Wieser, Global President, Business Intelligence at GroupM, “This is not going to make a huge difference considering the dominance of the US and China over the total market, but it is an interesting exception.”

Does this imply that digital-first markets are better positioned to withstand the effects of the pandemic? In China, where consumers spend almost two thirds of their media time online, Tencent’s digital ad revenues in the first quarter increased by 32% year-on-year. As the country reopens, its ad market is predicted to grow by 8.4% – even after COVID-19 is accounted for, a figure still larger than the 8% ad growth forecast for the US pre-coronavirus.

Uncertainty about people’s spending and consumption patterns makes it hard to determine if China is a test case for the rest of the world. As Brian Wieser explains, “One could argue that many elements of human behaviour are going to change permanently. The products we want could be radically different in the future – so data that was used previously to inform advertising and marketing spend is not necessarily going to be useful.”

The pandemic has caused advertisers of all sizes to rethink the type of campaigns they should run. For many, this means focusing spending: in a survey, lifestyle advertisers reported that acquiring customers is now their priority, and other consumer categories are also adapting their marketing strategies. Media – such as TV – that work well for identity-based marketing may not be the priority in the near-term.

Unilever, one of the world’s largest advertising buyers, is adapting on both fronts. According to Conny Braams, Chief Digital and Marketing Officer, “Unilever is guided by three beliefs: brands with purpose grow, companies with purpose last and people with purpose thrive. The pandemic will not waiver our commitment to purpose-led business, nor will it change how we position our brands. More broadly, we are witnessing a change in consumer behaviour. We know that life in the time of coronavirus is increasingly a life lived online which has led to an acceleration of digital adoption and e-commerce. Time spent with certain media channels has increased during lockdown, so we are adapting to these changes, shifting to a greater focus on in-home channels versus out-of-home.”

The pandemic is likely to shape the advertising industry in the long-term. Businesses are prioritizing survival for now, but in the future will have to find new ways of brand-building. The change in people’s media and consumption habits will force a rethink of how best to do so.

The second transformation is the decrease in the value of Pay-TV to the benefit of ad-supported streaming video services. Over the past decade, advertising on Pay-TV (subscription services covering linear and digital television) has increased. This is in contrast to the medium’s decrease in viewing hours across almost every age group, and the widespread adoption of smartphones and tablets that make it less likely that consumers devote attention to adverts on TV.

Alastair Shearly-Sanders outlines the challenge: “Clients and agencies have always sought the best way to invest. Any move towards business outcomes and what constitutes value to the advertiser will need to be managed as effectively as before. We expect to see brands focus more on bespoke strategies that align to revised business objectives, and so will seek out more flexibility in the way they procure media.”

As outlined above, direct response marketing has been prioritized by many advertisers, many of which rely on it for revenue generation. As ad spend reduces in general, spending on digital platforms has reduced more slowly. In the longer-term, this may strengthen the position of digital platforms in two ways. First, they appear to be suffering less relative to others in the advertising ecosystem, enabling them to emerge faster and stronger from the crisis. Secondly, they own behavioural data collected during the pandemic. In an industry where all players are trying to understand consumer habits, this will give platforms a competitive edge going forward.